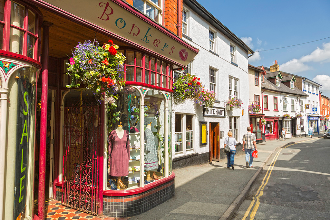 When the Central Wales railway was fully opened in 1868 it opened up the heart of Wales to Victorian visitors. The fashion to "take the waters" by drinking or bathing in the local springs brought thousands to the local spa towns, known as "Wells". Today the four "Wells" - Llandrindod, Builth, Llangamarch and Llanwrtyd make a fantasic day's tour. We'll show you these special places, explain the story behind the buildings, explore the beautiful scenery and get to know how the towns have developed this century. Llandrindod still maintains large hotels and is a thriving county town. Builth hosts the Royal Welsh Agricultural Show, Llangamarch is a sleepy village while Llanwrtyd markets itself as "Britain's smallest town" and is the adventure capital of Wales.