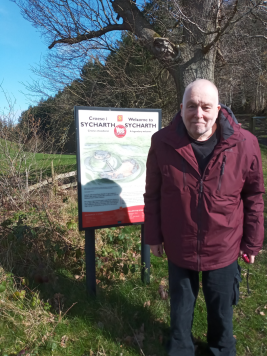 I did the one day Owain Glwndwr tour, with Rob in late March. We visited many significant historical sites. Pilleth, the site of the battle of Bryn Glas. Sycharth, Glyndwr's probable birthplace, Glyndyfrdwy and many others. We were able to discuss the history in a lot of detail. Though the Machynlleth, Parliament House was closed to the public, Rob was able to arrange a tour with a really well informed staff member, just for us.

We travelled through really beautiful countryside. We were lucky weather-wise. In some ways the fairly long journey between sites was as interesting and enjoyable as the sites themselves. Rob was able to explain exactly were we were, and interesting features. For example he would point out on many occasions where Offa's Dyke was. I remember on the route between Sycharth and Glyndfrdwy, we stopped on a hill and Rob was able to point out the Shropshire Plain, the Wrekin and the Peak District.

I can't recommend the tour enough. I was picked up and returned to my hotel. I have read a lot about Owain Glwndwr , the trip answered a lot of questions about his life in the context of the wild countryside he lived in.